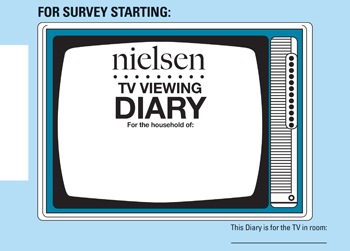 As of June 28th, 2018, the famed Nielsen paper TV diary rating service has finally been retired. The audience collection method that was still being used in 140 of the 210 local TV marketplaces is being replaced with electronic measurement. The fact that a paper survey methodology was being used at all in 2018, is a testament to its longstanding industry acceptance.

While nationally data and the largest seventy markets had moved to some form of electronic measurement, each providing next day reporting, the paper diary markets were resigned to receiving data only four times a year, after what were known as the TV sweeps periods. Now they will get data from actual cable boxes. While these homes will not provide information in real-time, stations in these markets will at least see data on a monthly basis.

To be polite, the diary was not designed for the digital age. While it could in theory measure DVR-ed viewing, it couldn’t measure Netflix or other on-demand content. It was designed for a time where computers did not exist, and there were only three networks on television; before even PBS.

Fast forward to 2018. In a world of device-based distractions, it is improbable to expect people to write-down what they are watching, when they are watching it.  You would generally fill out the diary later in the week. Then you jot down either what you think you recall watching, or you guess. Just think about how hard it is to remember everything you watched two days ago. Adding to the challenge is that usually one person typically recorded viewing for the entire household. And of course, many respondents will write down what you want people to think you watched, even if you didn’t watch it.

For PBS stations in these markets, the move to electronic measurement is a positive development. For the month of February 2018, Nielsen provided both electronic and diary-based audience data so that we could understand the difference. On average, the PBS primary station had larger audiences for both the total day and for primetime. Households increased by roughly 20%. Younger adults aged 18-49 had the largest change, with viewing levels more than doubling with the electronic measurement across the total day and increasing by 65% during primetime. Comparatively, The big 4 broadcast networks did not fare as well. The majority of their affiliate stations experienced slightly lower audience levels in primetime.

In general, the lesser branded networks benefited from the move to electronic measurement. As a whole, the grouping of PBS station sub-channels saw their household audience levels increase by over 75% in primetime. Adults aged 50-64 saw over a 255% increase in primetime for the sub-channel group. Although these percent increases are quite large, the audience with electronic measurement is still small.

The move to electronic measurement does not make Nielsen’s measurement perfect, but certainly more accurate.

To learn more about this change in measurement and how it affects your station, please contact the PBS Business Intelligence team at BusinessIntelligence@PBS.org

Upcoming Webinar: To learn more about TV ratings, including how they are calculated, please join our system-wide webinar, Ratings 101 at 3pmET Thursday, November 8, 2018. Register here.