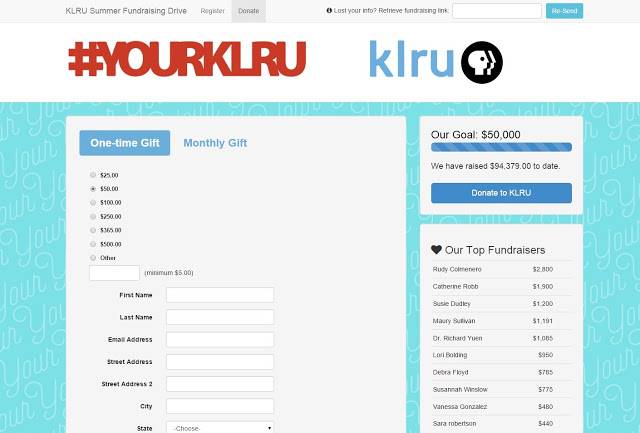 KLRU has been making a concerted effort to experiment around on-air pledge drives for several years, in large part due to viewer feedback. This June, KLRU decided to take a calculated risk by taking the pledge drive off air and putting it online. Instead of a typical 10 day on-air pledge drive that interrupts the regular schedule and breaks into programming with pledge messaging, KLRU launched a 5 day online giving campaign with built-in crowdfunding techniques that included: Peer to Peer Fundraising, social media & email campaigns and the use of urgency and incentives.

The online campaign was built, branded and promoted around the hashtag #yourklru and encouraged viewers/donors to: 1) Watch KLRU as you normally would (we aired on-air spots in between shows to encourage viewers to give online) 2) Give June 1-5 at klru.org 3) Engage by sharing what you love about KLRU on social media by using the #yourklru and 4) Inspire by becoming a personal fundraiser and encouraging friends, family neighbors and co-workers to give as well. There was also strong messaging around transforming the way we fundraise, but not being able to do it without the community’s participation in this campaign.

For the Peer to Peer aspect of the campaign, KLRU engaged members of the following groups: KLRU Volunteers, Young Professional donor group, Development Committee members, Board members and Community Advisory Board members, as well as opening it up to anyone in the community to create a personal fundraising page, set a goal and begin fundraising on KLRU’s behalf. A personal webpage and toolkit provided by KLRU made messaging easy for these personal fundraisers.

KLRU built out a full social media and email messaging campaign that engaged viewers, donors and prospects around the #yourklru. Facebook, Twitter, Instagram and Periscope were used to share pictures, videos and testimonial quotes throughout the campaign. KLRU actively began use of the hashtag in the month prior to build buzz and excitement around the online campaign leading up to the launch on June 1st.

Urgency and incentives played a large role throughout the 5 day online drive. Daily/hourly goals were messaged via daily emails, blog posts and social media posts. Giveaways (i.e. AppleTV, Austin City Limits passes, KLRU t-shirts) were given away to anyone who donated during specific timeframes or engaged in our social media campaign. Challenge matches were incorporated into 3 days of the campaign to double donor dollars instantly.

The campaign exceeded our expectations and it was amazing to see the community embrace this new way of giving to KLRU. Overall, we raised $94,000+ and exceeded our original goal by 89%. Here are some things we learned by doing this campaign and about this campaign through a follow-up survey to donors:

1. The online drive resonated with our core donor base (60+). Were we able to tap into a younger audience? Yes, but not in mass numbers because by far those who supported were of the Boomer Generation or older.

3. Social media was an important complement to the campaign, but email and on-air spots were the key drivers for most donors.

4. Majority of those who gave wanted to support a new direction of fundraising at KLRU.

5. Net revenue for an online campaign is greater than an on-air pledge drive.