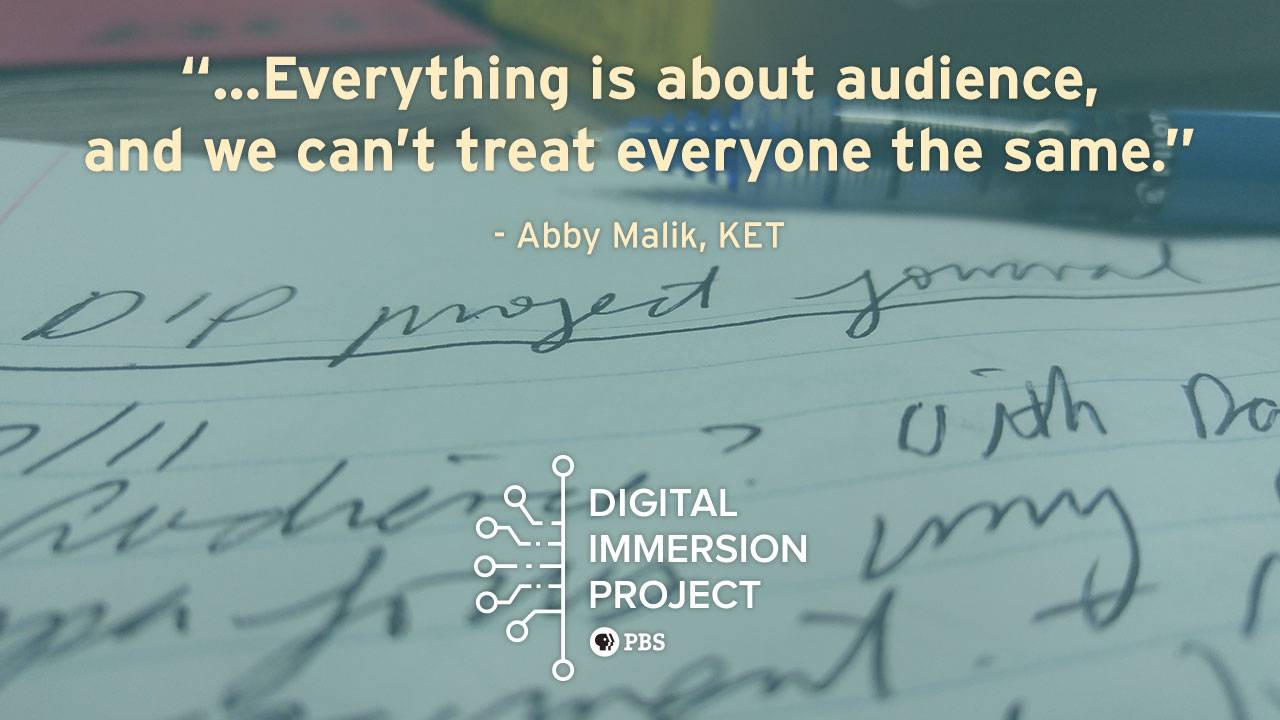 The Digital Immersion Project, developed by PBS Digital with support from the Corporation for Public Broadcasting, is a unique opportunity that mixes in-depth training, hands-on workshops, and collaborative mentorship to improve overall expertise in digital strategies and tactics. The professional development program also focuses on strategic and organizational tactics, with the selected participants being able to draw on the project’s learnings and a national network of public media contacts to further digital success at the local level.

2017 was the first year for the project, bringing together 25 public television professionals from all around the country. The participants first gathered at TechCon in Las Vegas this past April, and have been working individually, in topical cohorts, and with mentors ever since. The first iteration of the project will complete at the end of October 2017.

All year long, each participant has been working on a Digital Strategy exercise that takes the project’s learnings and maps them to the station’s goals, complete with tactics and deliverables. We are featuring just a few of these success stories for their system peers to learn from and gain a little inspiration.

It was easy for me to decide what I wanted my digital immersion project to be. My role at KET has become more focused on digital fundraising, and I was itching to experiment with email campaigns.

With the help of my mentor, Dan(alytics) Haggerty, I chose two very specific audiences to experiment on. Then I created a content strategy for a five-email drip campaign. I had two goals: create a drip campaign strategy that I could replicate station-wide, and, of course, convert some donors.

It might sound silly, but one of the first things I started doing was keeping a DIP journal. Part of my project’s goal was to come away with a template of what a solid campaign looks like, and so I wanted to remember and understand the decisions – good and bad! – I made along the way.

Another big step was to provide content that these folks didn’t receive in any other KET emails. However, this didn’t mean spending hours creating – among the five emails, about half of the content was simply repackaged to look shiny and new.

Finally, a big step in this project was to work closely with KET’s membership manager. This project was a marriage of both of our expertise – digital marketing and fundraising – and it was important to have her buy-in, especially because I think these types of “micro campaigns” are the future of email fundraising.

As for my results: Of the two lists that went through the drip campaign, one yielded a 6.4% conversion rate. The other list is TBD. I can build on 6.4% – definitely a win in my book!

The most valuable lesson from this project is that everything is about audience, and we can’t treat everyone the same. We have subsets (of subsets of subsets!) of our audience that we have to engage differently. You might have one particular goal (become a donor) but the journeys are many. We have to be willing to create those unique journeys, especially in our digital strategies.

At my station, I’m hoping this email drip campaign can be applied to many situations where a digital conversion is the goal. For instance, I’ve already begun work on campaigns for the numerous audiences within KET Passport. I’m especially looking forward to using this drip campaign template to see if we can increase our KET Passport activation rate.